Start a Wiki
George of the Jungle and the Search for the Secret is a video game based on the animated television program George of the Jungle. The game is in 3D but plays like a 2D side scrolling platformer game with 3D turns and camera angles in the environment and the path that George walks on. There are a total of 6 levels; 2 with a jungle theme, 2 with a swamp theme, and 2 with temple theme. All 6 levels are made to look like the cartoon series (the 2007 remake, not the original 1960s version). Not once in the game do they specify what the secret actually is.

George and Ape are running through the Jungle for an important mission. Ape asked George of what the important mission is, Saving the baby crocodiles from being eaten or wrestling momma crocodiles while returning the babies. But George Answers it's actually vine soccer practice. Then he called for Ursula and Magnolia for practice but there's one problem both Ursula and Magnolia aren't feeling to good. The Witch Doctor came in to tell everybody that the spirits are making his daughter and Ursula Sick have been awaken. Then came in Dr. Scott telling the Witch Doctor there are no such things as evil spirits, while he have been working on the cure for the girls to get better again, and, not to mention, for him to be very, very rich. Dr. Scott and Witch Doctor were fighting over the book. Then when the book fly over, Tookie took the book. Then the gang told George to do something. George responds by Juggling, but they told him to "Get the book back!" George thought an idea by getting the book back.

As George Leaves the Treehouse, he goes into Monkey Village, it may sounds funny, but these monkeys means business, to retrieve the first page. He will have an encounter with tribal monkeys, and after he's went in to the first boss, he has to face Slappy, the Superintendent of Monkeys (Note: Be sure to avoid his attacks, when Slappy takes a break, he throws dynamites at you. He can take 3 rounds like any boxer can do) After defeating Slappy, who demands a do-over, George has a first page of the book and declines Slappy's demands.

Note: Despise of the DS version getting a Mediocre Rating, it is the Highest Rating of the 3 platforms on IGN.

"Remember the 1997 live-action George of the Jungle movie starring Brendan Fraser? You're better off digging it out of the bargain DVD bin than trying to play this game. Even if your kids are big fans of the cartoon, they deserve better than this. It's not funny and it's not fun to play. If the developers had simply fine tuned the collision detection it probably would have been fine. As it is, this is one bungle in the jungle." -Damon Hatfield, IGN (PS2/Wii)

"It looks ok and sounds great, but it's really short and the mini-games are tiresome. But if your son or daughter just has to have a George of the Jungle game, definitely go with the DS version over the console editions" -Damon Hatfield, IGN (DS Version) 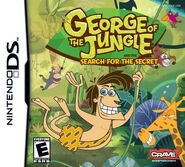 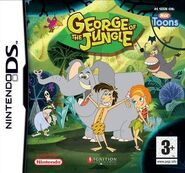 DS Gameplay (Courtesy of IGN.com)
Add a photo to this gallery

Slappy, the Superintendent of Monkeys.

Beating Up the tribal monkey

Watching out for Spikes

Swinging on the Rope.

George battling the Totem Pole 5th Boss.
Add a photo to this gallery
Retrieved from "https://georgeofthejungle.fandom.com/wiki/George_of_the_Jungle_and_the_Search_for_the_Secret?oldid=7001"
Community content is available under CC-BY-SA unless otherwise noted.